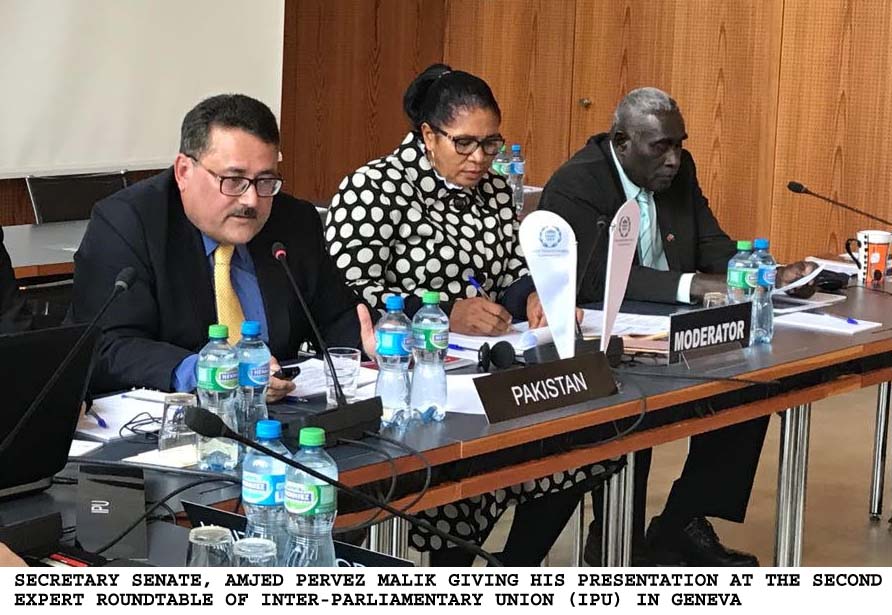 Based on its newly developed and progressively reformation model, the Senate of Pakistan has been presented as a case study at the second expert roundtable of Inter-Parliamentary Union (IPU) in Geneva on the common principles for support to parliaments. Secretary Senate Amjad Pervez Malik gave detailed presentation on the self-governed and self-conceived strategic plan.

He informed the participants that indigenously conceived plans developed by Parliaments across the world make development conducive. He observed that internal reforms in Parliaments are a paradigm shift towards strengthening internal mechanisms, amending rules of procedures and utilizing internal resources of stability.

He briefed the participants about the 2013 strategic plan adopted by Senate Secretariat which was the first step towards governing own development. This roadmap of Secretariat was given complete political ownership by the leadership in 2015 and brought forth a multifaceted Parliamentary governance and development atmosphere.

The roundtable conference is aimed at exploring good practices, sharing and exchning ideas and experiences with regard to parliaments role in governing their own development.

Amjed Pervez Malik said that political will for change and cooperation between leadership and Secretariat administration are a key to Parliamentary reformation process. He remarked during his presentation that self-reliance, futuristic planning and judicious use of available resources should be the guiding principles of parliamentary governance.

He said that the a vibrant House Business advisory Committee, efficient Senate Finance Committee, Council of Chairmen, Committee on Ethics, Senate Committee of the Whole and linkages with the academia have contributed to immensely in enabling the Senate as Upper House of the Parliament to play more assertive role based on its self-development model.

The Common Principles for Support to Parliaments aim to enhance the quality and effectiveness of Parliamentary support programmes. They were adopted by the 131st IPU Assembly in October 2014 and have since received the endorsement of over 115 parliaments and organizations. Secretary Senate of Pakistan has been contributing in finalisation of these Principles. At this occasion the book of Mr Amjed Pervez Malik was launched as a base document for the Guide  for parliaments and partners that will help enable more proactive engagement by parliaments.