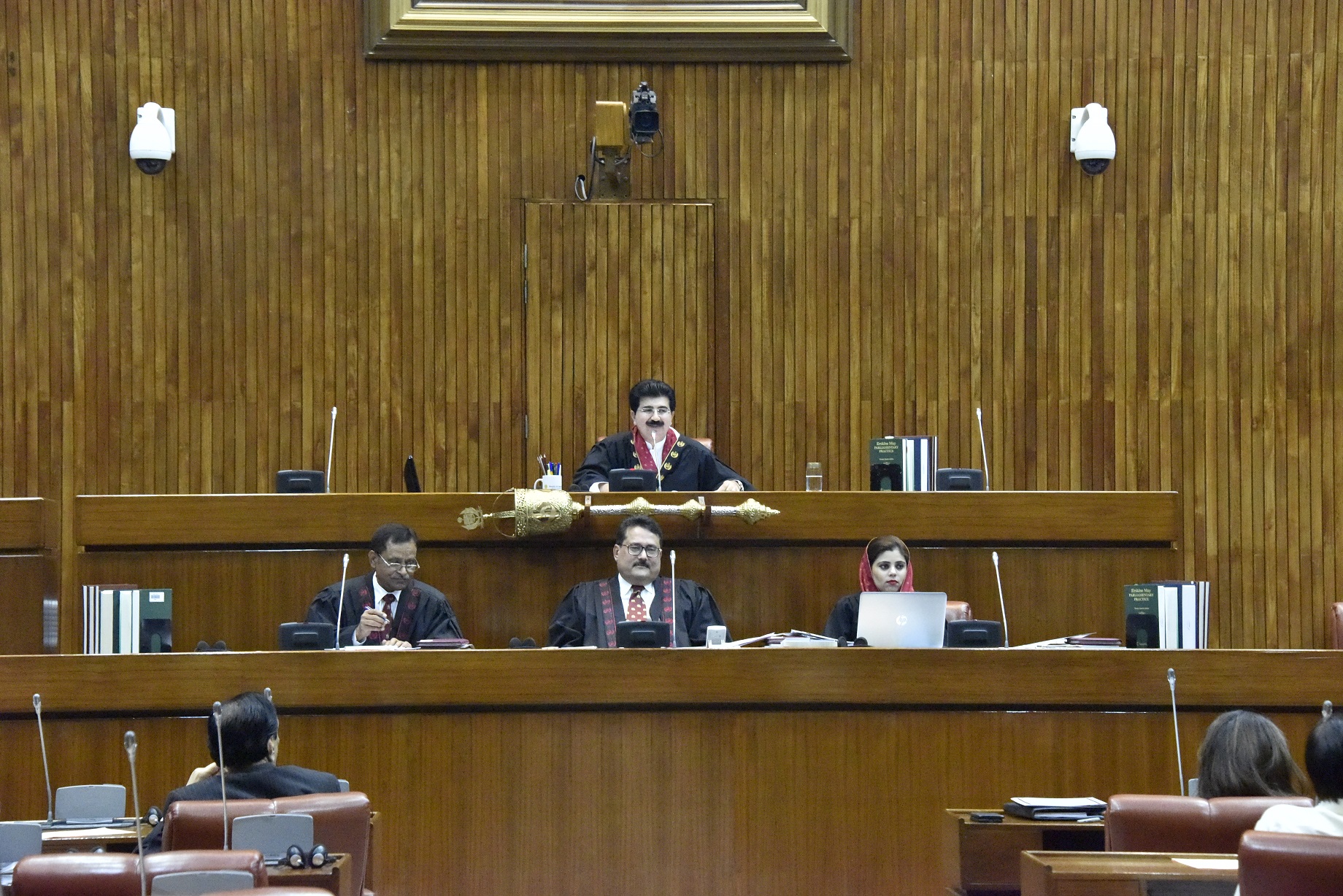 The first sitting of 276th session of Senate was held with Chairman Senate Muhammad Sadiq Sanjrani in the chair who chaired his first formal sitting of the Senate House today at the Parliament House on Monday.

The House passed a unanimous resolution condemning Indian atrocities in Indian Occupied Kashmir. Leader of the Opposition Senator Sherry Rehman presented the resolution condemning recent escalation of state-sponsored violence in Shopayan and Islamabad in the Indian Occupied Kashmir which has left scores of people killed and injured by Indian soldiers and policemen. The Resolution urged the international community, Islamic World, OIC, United Nations, HR organisations and watchdogs to denounce the Indian State’s blatant violation of the UN Charter and UN Resolutions. The House also recommended to the government to appoint a special envoy to raise the Kashmir issue at international forums and to take all necessary steps to get appointed a special envoy of UN for Kashmir issue.

Former Chairman Senate Mian Raza Rabbani on a point of order raised a matter of breach of privilege of the Parliament when the President of Pakistan has on 8th April, 2018 promulgated four ordinances while being well aware of the fact that both Houses of the Parliament have already been summoned and that too by the President himself who happens to be a part of the legislature. The four ordinances promulgated have not even been put before the Cabinet which is a requirement under rules. A Supreme Court in a judgement has forbidden the Prime Minister to take solo decisions on behalf of the Cabinet. He observed that the Ordinances did not have prior approval of the cabinet and hence are not valid and are ultra vires to the judgement. Rana Afzal told the House that approval of Cabinet was taken by means of circulation and the Ordinances are to come to the Parliament for final passage and to become an act. Leader of the Opposition Sherry Rehman and Parliamentary Leader Azam Khan Swati supported the point of order and requested for referral of the matter to privileges committee.

The Right to Free and Compulsory Education (Amendment) Bill, 2018 was moved by Senator Samina Saeed and was subsequently referred to the Standing Committee concerned.

The House discussed the taxes levied on petroleum products in the country in a motion moved by Senators Siraj ul Haq and Mushtaq Ahmed. Members of the Upper House discussed international petroleum prices and their comparison with the prices in the country. The motion to discuss Pakistan’s deteriorating healthcare system was moved by the Leader of Opposition Sherry Rehman and was discussed by members of all four provinces highlighting the need of allocating more budget to healthcare and making it a priority. The House also discussed a motion on recent devaluation of Pakistani Rupee by 5% in addition to the sharp devaluation in December 2017, which will have very negative impact on the economy making imports more expensive. Rana Muhammad Afzal told the House on behalf of the government that devaluation was need of the hour based on a number of indicators.

The House passed three resolutions on a number of subjects including recommendation to allocate funds in PSDP for opening of new passport offices in all provinces, reducing prices of life saving drugs in the country, recommending to the government to implement the Aaghaz-e-Haqooq-e-Balochistan package in letter and spirit.

The House will now meet again on Tuesday at 3 P.M.