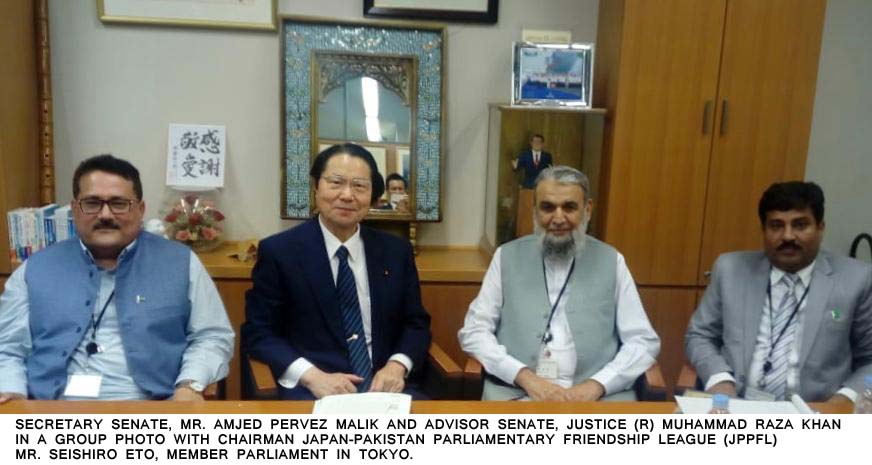 Chairman Japan- Pakistan parliamentary Friendship League, Seishiro Eto and Member of Japanese Parliament has said that Japan takes pride in its relations with Pakistan and relationship between the two is on a positive trajectory. In a meeting with three member delegation of high ranking officers of the Senate led by Secretary Senate Amjed Pervez Malik, currently on a study visit to Japan, the Japanese member Parliament said that Pakistan and Japan have a shared vision aimed regional prosperity and development.

He said that such exchanges would provide an opportunity to explore new vistas of cooperation. Mr. Eto informed that praised the development in Pakistan and underscored the need for more close collaboration at different levels to create an understanding on issues and further consolidate institutional linkages.

Secretary Senate Amjed Pervez Malik has that Pakistan highly values its bilateral relations with Japan and there is dire need to explore new avenues of cooperation and work together to strengthen parliamentary linkages through frequent exchanges at parliamentary and other levels. He said this during a meeting with Mr. Seishiro Eto, Member of the Japanese Parliament and Chairman of Japan- Pakistan Friendship League in Tokyo.

Secretary Senate was accompanied by Advisor Senate Justice ( R ) Muhammad Raza Khan and Deputy Secretary Senate Abdul Fattah Ujjan. The delegation of the officers of Senate led by Secretary Senate Amjed Pervez Malik in on a four day study visit to Japan which has been sponsored by Inter- Parliamentary Union.

He said that Japan and Pakistan have historically enjoyed cordial relations and both sides attach high importance to relations at state, government, parliament and people to people levels.  He said that institutional linkages would provide further impetus to friendly ties between Islamabad Tokyo and the respective friendship groups have to play a vibrant role in this regard.

Secretary Senate observed that there is huge scope in business and tourism and both sides need to exploit the potential of these areas for mutual benefit. He said that ground realities have changes in Pakistan and travel advisories need to be reviewed to give boost to tourism and business sectors. “The newly elected leadership and the parliament as whole is eager to further expand ties in multiple sectors and both the countries need to work with a new resolve and commitment to strengthen cooperation” Secretary Senate said.

Chairman of Japan- Pakistan Friendship League welcomed the delegation. Earlier, the delegation participated in a discussion on share experiences about parliamentary and legislative procedures. He has said that the Senate of Pakistan, under the patronage of Chairman Senate, has taken some bold steps to provide indigenous legislative drafting facilities to the members and all out efforts are being made inject more professionalism through capacity development and introduction of new mechanisms to strengthen the existing systems. Secretary Senate said this during his presentation to his counterparts in the House of Representatives of Japanese Parliament.

He said that the Senate of Pakistan has devised a vibrant plan to improve institutional efficiency and provide excellent services to the members of Parliament. He informed that the Senate is a House of Federation and is playing an effective role in national integration and promoting provincial harmony.

During his presentation, Secretary Senate Amjed Pervez Malik gave a detailed over view of the parliamentary scheme and procedures and the role being played by the Senate.  He said that the Senate is playing a vibrant role under the dynamic leadership of Chairman Senate Muhammad Sadiq Sanjrani and that the elected leadership of has a clear vision to enhance its efficiency and further improve its functioning through national and international collaborations.  He said that Senate of Pakistan, over the years, has emerged as an essential organ and a stabilizing factor of the federation.He stressed for enhancing the capacity of the parliamentary staff through frequent exchanges.

Amjed Pervez said that the purpose of establishment of Legislative Drafting Unite is to provide a structured support to the members of Senate as the trend of Private Member Bills is on the rise.  He said that development of linkages with the International Parliaments having established structures of Legislative/Drafting facilities for the MPs can prove to be beneficial.

He said that the visit would help in providing a mechanism to support the Legislative Drafting Unit (LDU) to develop Drafting Manual/Instructions, enhance its capacity in translating the ideas of the Senators into legislative proposals by drafting new laws or by proposing appropriate amendments in the existing laws.  He said that it will enable the Legislation Branch for initial scrutiny of Bills and reviewing amendment received in respect of a Bill under consideration of the House/ Committees.  He said that it will also help in equipping the LDU and Committee on Delegated Legislation with techniques to scrutinize rules, regulations, bye-laws, schemes or other statutory instrument framed in pursuance of the Construction or the legislative functions delegated by the Parliament.  He further remarked that the visit would help enhance capacity of the relevant branches to extend expert advice to the Committees on drafting issues, as well as having amendments properly formatted so that they can be easily engrossed if adopted. Participants applauded the detailed presentation of the Secretary Senate and his remarks on enhancing institutional collaboration to build in-house pool of professionals to assist the members in legislative functions. They hope that institutional linkages between the Parliament of Pakistan and Japan would go a long way and make joint efforts to achieve institutional excellence in all sectors.

The delegation also visited the library and other important wings of the Japanese parliament.