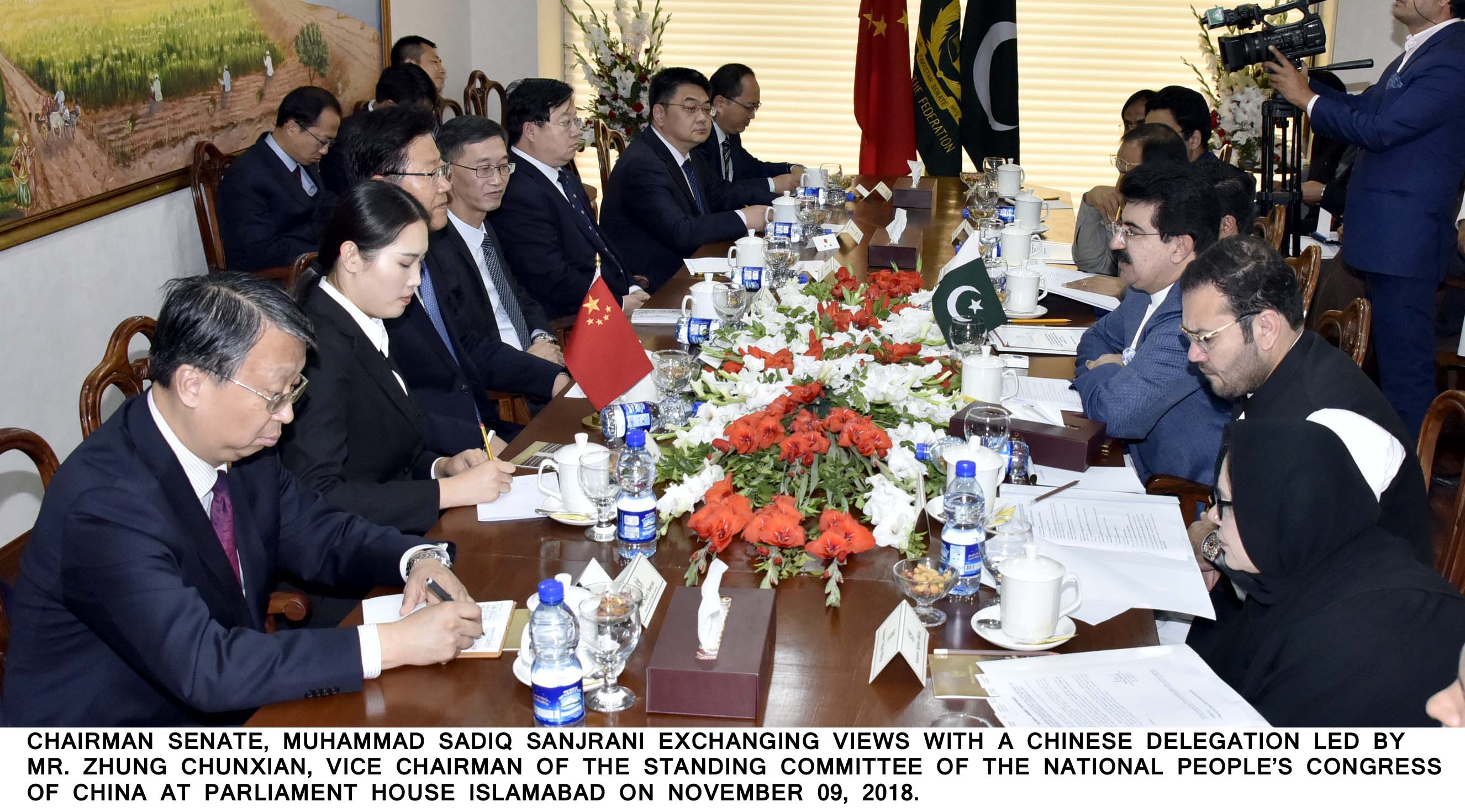 Chairman Senate Muhammad Sadiq Sanjrani, in a meeting with 15 member Chinese parliamentary delegation at the Parliament House on Friday, has said that Pakistan and China share a shared objective of regional development and both the countries can play a vital role in shaping the destiny of Asia. The Chinese delegation was led by Mr. Zhang Chunxian, Vice Chairman of the Standing Committee of National Peoples Congress(NPC).

He said that Pakistan values its cordial and friendly relations with China and wants to further expand ties by opening up new vistas of cooperation. He greeted the Chinese side for organizing a successful first ever International Import-Export Expo and hoped that it would further pave the way for enhancing trade and economic links. He said that the event was organized at a time when the Pakistani premier Imran Khan was visiting China and participated in the Expo to explore new avenues of bilateral cooperation besides holding high level meetings. He said that Pakistan takes pride in its ties with China. “ Relations between the two are time tested and have strengthened with the passage of time” Sanjrani said.

Chairman Senate also appreciated Chinese President Xi Jinping’s vision of shared prosperity and specially the steps taken for social development through millions of people have been lifted out of poverty by improving their standard of life. He said that agenda of domestic reforms of current government including improving governance , poverty alleviation and anti-corruption resonates closely with President Xi’s agenda of national development.

He said that both sides can learn from each other’s experience. Chairman Senate apprized the delegation of the recently held Asian Parliamentary Assembly Standing Committee on Political Affairs in Gwadar. He said that Gwadar has the potential to push forward the regional development agenda as envisaged by China and Pakistan. He thanked the Chinese government and people for the green Gwadar project through which one million trees would be planted in Gwadar. He said that 100 delegates from 23 Asia countries have participated in the meeting in future’s port city of Gwadar which is a testimony to the fact that Asian countries acknowledge the role Gwadar in the overall socio-economic development of the region.

Leader of the Chinese delegation welcomed the remarks of the Chairman Senate and said that trade is highly important for both the countries and economic development is given high importance. He said that Gwadar would further accelerate the growth and development. He also underscored the need for institutional cooperation at parliamentary other levels. He said that high investment in the industrial sectors in Gwadar would not only bring prosperity to Gwadar but also to Balochistan. Chinese side also assured that students from Balochistan would be given technical skills to enable them to benefit from the local employment opportunities.