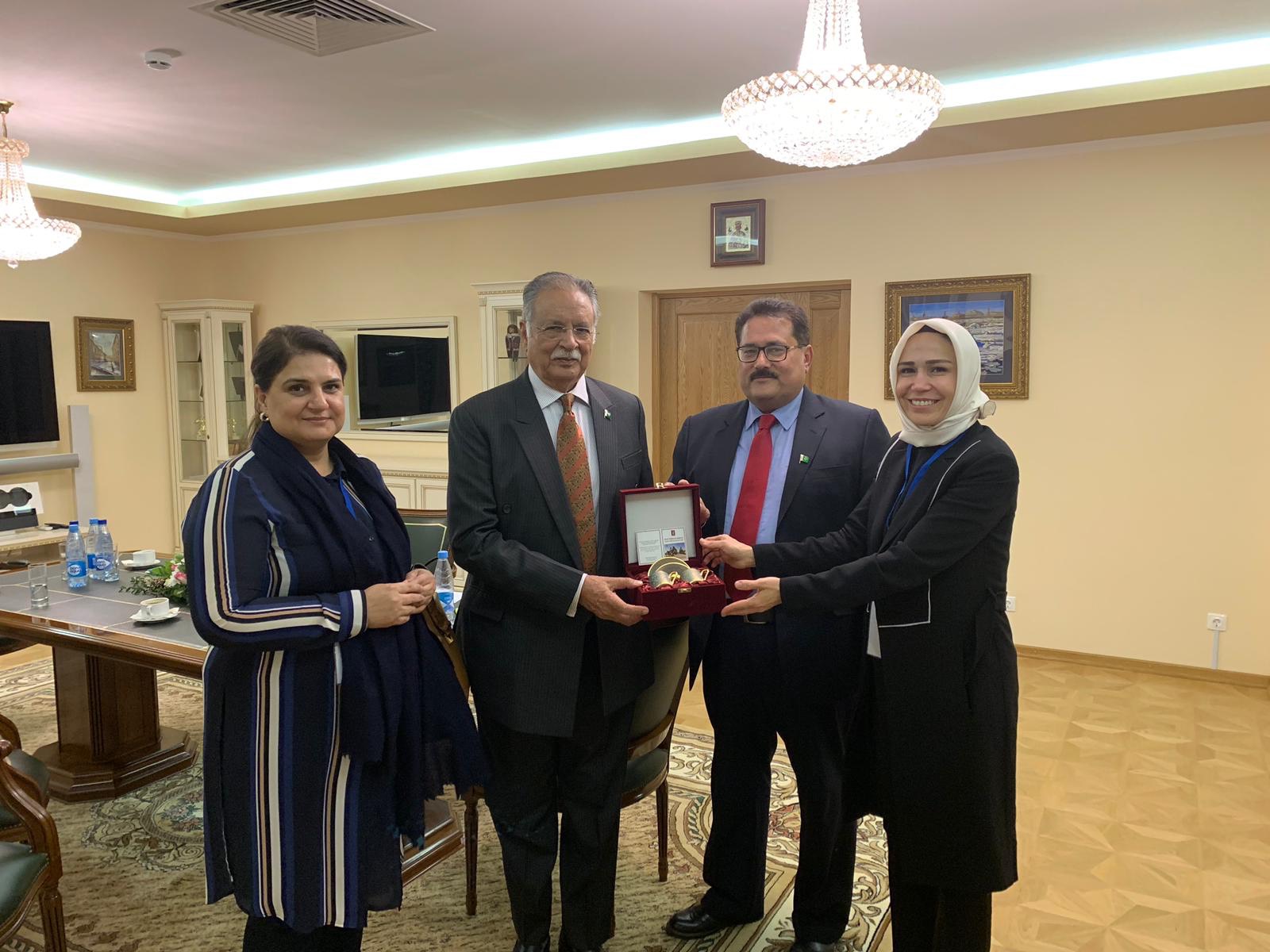 Ms Erdogan has been looking after APA Affairs on behalf of Turkish Parliament whereas Mr. Amjed Prevez Malik has been spearheading Senate of Pakistan’s efforts to reform APA and take it to higher levels of Asian Parliament since the previous Presidency of APA in 2013-14 and has successfully arranged meetings of Assembly in Gwadar Balochistan, Lahore and Islamabad. Pakistan has assumed a leadership role in this Inter-Parliamentary organisation through these consistent efforts. Senator Pervez Rashid and Senator Robina Khalid were also present during the meeting.

Both the sides have agreed that Asian Parliamentary Assembly (APA) would be transformed into a well-structured and vibrant regional parliamentary forum to steer the collective agenda of Asian development and prosperity.

Secretary General Senate Amjed Pervez Malik apprised that Chairman Senate of Pakistan has a vision for formation of Asian Parliament and also for reformation in APA.

“In letters addressed to Speakers of Turkish and Iranian Parliaments, the Chairman had therefore suggested to hold a Speakers’ Conference or a Troika Plus meeting (former, current and next APA President plus Iranian Speaker)” Secretary General Senate said.

He also asked Ms Erdogan about Turkey’s view on future course of action regarding APA reformation, especially annual contribution by member states, opening of bank account in Istanbul for this purpose and rotation of APA Secretariat.

Secretary General Senate said during the meeting that it is a matter of mutual satisfaction that Pakistan and Turkey have played most vital role in APA. When Pakistan assumed APA Presidency back in 2013, it was a time when two plenary sessions had been missed and APA had become dormant. Through dedicated efforts, Pakistan Senate revived APA and gave it new zeal.

He noted that Pakistan Senate has played prominent and proactive role in two key initiatives of APA. First, for the creation of an Asian Parliament as Special Committee for Creation of Asian Parliament (SCCAP) played its role in this regard and now Working Group (WG) on Asian Parliament has been formed as a result of deliberations at Asian Parliamentary Assembly Meeting at Gwadar. First WG meeting has also been held at Bangkok and we are looking forward to the next meeting. However it is a long term project that would require input from multiple stakeholders and persistent efforts.

He underscored that reformation in APA so as to make it more structured and vibrant, like other regional parliamentary forums, as it is the need of time. Inter alia, one aspect of moving towards it was proper mechanism of APA funding by all Member Countries. Pakistan Senate had been advocating for it since long and we have already conveyed our concurrence for the initiative.

Ms Erdogan expressed appreciation for Pakistan’s active role in APA which has led to revival of this important regional parliamentary forum especially the organizing a remarkable meeting at Gwadar and showed the resolve of her country to work closely with Pakistan in future for further improving and reforming APA.

It was mutually agreed that meeting of APA Standing Committee on Budget and Finance should be held soon in Iraq and in case Iraq isn’t able to hold it, it should be held in another country through mutual consultation without further delay so that deliberations on all important matters regarding restructuring and reformation of APA could be held at length. The two sides also agreed to seek vision of their respective leadership on these matters and hold further discussions in due course.