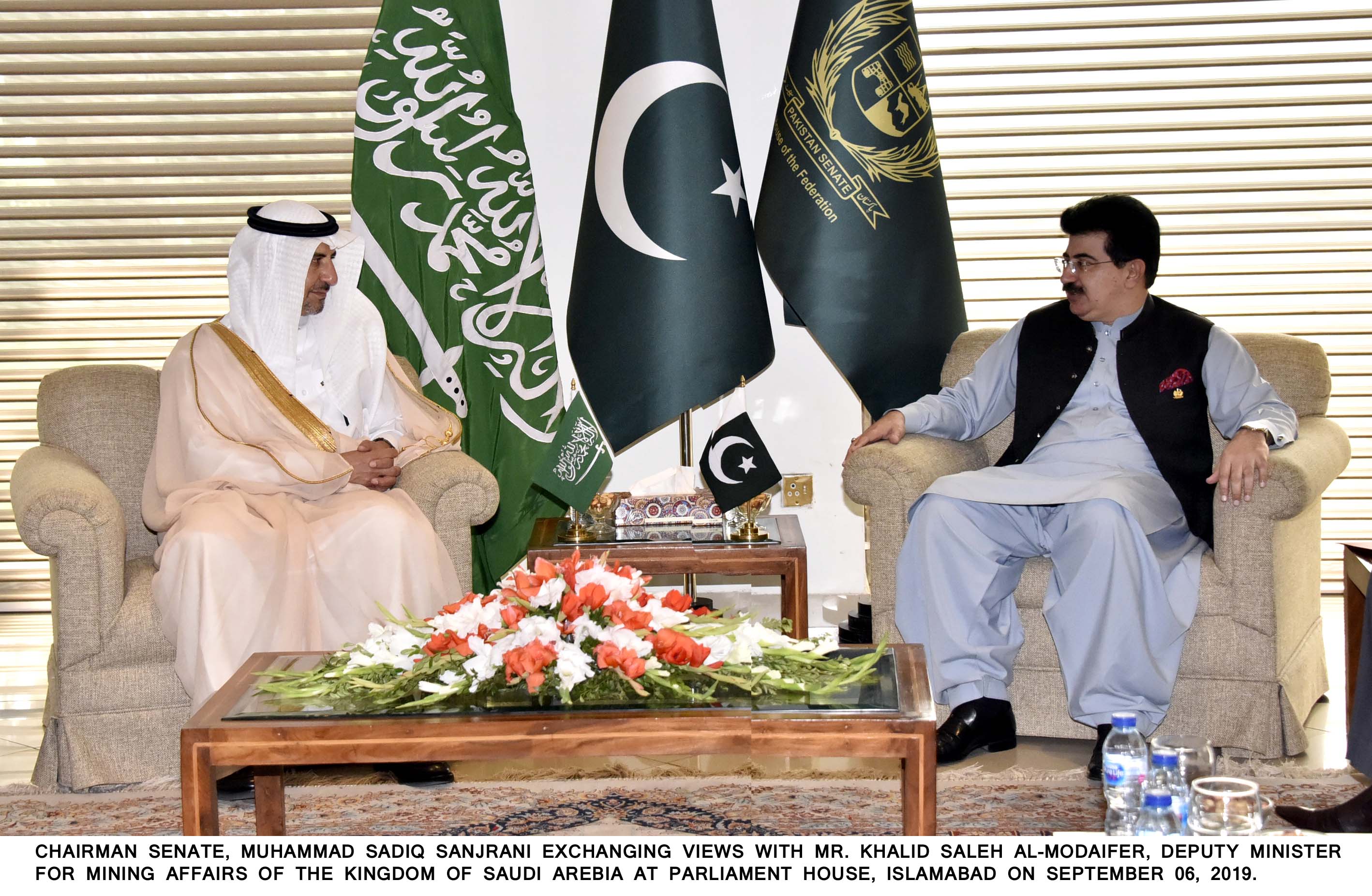 Saudi Keen to Invest in Pakistan :

Islamabad, the 6th September, 2019:-    Chairman Senate Muhammad Sadiq Sanjrani has said that recent volatile situation in Indian Held Kashmir (IHK) required a joint and sagacious response from Muslim Ummah as Indian government under the leadership of Narendra Modi was involved in crime against humanity in the occupied valley. While exchanging views with Khalid Saleh Al-Modaifer, Deputy Minister of Energy, Industry and Mineral Resources who is leading an 18-member delegation of Saudi Arabia to Pakistan, Chairman Senate said that Modi’s recent actions were totally unconstitutional, illegal and contrary to the international laws by unilaterally altering the status of Jammu and Kashmir. He said that the acts would prove detrimental to regional peace and stability. “ Fear and uncertainty prevails in the occupied valley as the whole area is under curfew since 5th of August creating severe shortage of food, medicines and other necessities of life” Sanjrani mentioned with pain and grief. He said that women, children and elderly people are the worst victims of continuous barbaric policies of India in IHK, however, Kashmiris showed their strength by standing against the brutalities of Indian brutalities. He said that global community has to set aside the traditional approach and has to act proactively instead of becoming a silent spectator. He called for resolving the conflict in a peaceful manner in accordance with the aspirations of Kashmiri people and ensuring implementation of relevant UN resolutions. He also urged the OIC member countries to play their role for resolution of Kashmir.

During the meeting, Saudi Arabia has expressed its keen interest for exploring more avenues for investment as there is huge potential for trade and economic activities in Pakistan. He observed that mutual trust and confidence has been witnessed in the decades’ long friendship between the two sides.

Sanjrani considered the visit of Saudi Crown Prince Muhammad Bin Salman highly important as it has helped in laying the foundation for a new era of cooperation.  Chairman Senate said that Saudi investment has helped in rejuvenating the confidence of international community on Pakistan.

He further said that the recent high level reciprocal visits would usher into a new era of economic cooperation.  He called for developing an institutional mechanism and legal framework for better institutional collaboration.

Chairman Senate Muhammad Sadiq Sanjrani has said that Pakistan and Saudi Arabia are intertwined into a relationship having its basis in religious, social, cultural and historical commonalities.

Chairman of the Saudi Shura Council thanked Senate Chairman and members of the Senate for warm welcome.  He said that Saudi Arabia accords high importance to its relations with Pakistan.  He said that roots of our bilateral relations are deep rooted in history and people of both the countries share common aspirations. He said that mutual exchange of frequent delegations would further boost the linkages between the two countries. He agreed on enhancing institutional cooperation between Senate and the Shura Council. The members of the visiting delegation while talking on the occasion said that Saudi Arabia is very keen to benefit from the economics prospects being offered by future economic hub of the region and they are willing to invest in Gwadar.

Chairman senate observed that Pakistan and particularly Baluchistan is blessed with natural resources. Saudi investors can explore opportunities for investment in mining sector and can also initiate joint ventures in other projects for mutual benefit of the people of two sides.

Regarding parliamentary interactions, the Chairman Senate emphasized the need for further promotion of mutual cooperation with primary focus on enhancement of institutional engagements and exchange programs for the capacity building of parliamentary staffers. He proposed the signing of MoU between Senate and the Shura Council to building strong institutional linkages. Chairman Senate apprized the delegation about the establishment of a parliamentarians’ forum across the globe, named International Parliamentarians’ Congress (IPC) being setup by the Senate of Pakistan to initiate a political discourse across continents and regions based on cooperation, understanding and mutual respect. IPC is the brain-child of Chairman Senate Muhammad Sadiq Sanjrani to bring together parliamentarians to implement ideas of peace, prosperity and progress through dialogue and sharing of parliamentary experiences.

Leader of the delegation Khalid Saleh Al-Modaifer, Deputy Minister of Energy, Industry and Mineral Resources said that Pakistan is an important country for Saudi Arabia and both countries have identical views of different issues. The head of the delegation thanked the Chairman Senate for warm welcome and expressed the hope that the visit would prove fruitful for cementing a long lasting, mutual beneficial and meaningful bilateral relationship between Pakistan and Saudi Arabia.  Senate Chief also hosted a reception in the honor of delegation.