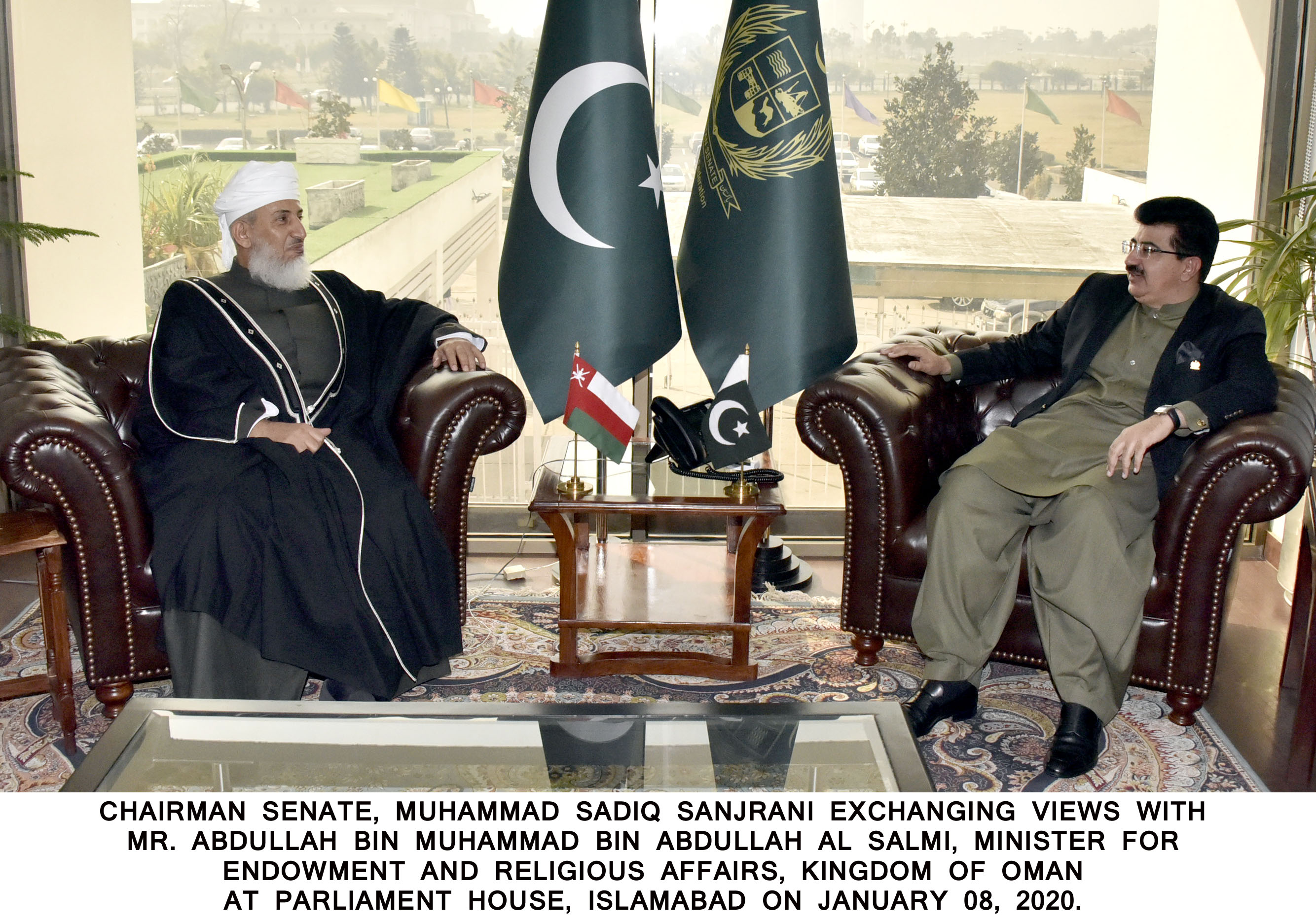 Chairman Senate Muhammad Sadiq Sanjrani said that Pakistan and Oman enjoy historic bilateral relations and are twined together through cultural, religious and social similarities and both the countries have agreed to gear up the momentum for enhancing economic ties steered through Parliamentary diplomacy.  Chairman Senate expressed these views in a meeting with parliamentary delegation of Oman led by Abudllah Bin Mohammed Bin Abdullah Al Salmi, Minister for Endowment and Religious Affairs of Oman here at Parliament House on Wednesday.

He said that there is a huge potential for cooperation in different sectors for mutual benefits of the people of both the countries.  Sanjrani observed that both Pakistan and Oman are interacting with each other at different platforms and international forums.  He hoped for more coordinated efforts to strengthen institutional cooperation at all levels.

Sanjrani also recalled his visit to Oman in which a historic Memorandum of Understanding (MoU) was reached between the two sides for enhanced institutional collaboration between State Council of Oman and the Senate of Pakistan. He added that Pakistan looks forward to heightening progress, prosperity and development in relationships and praised the Omani parliamentary experience, development and uniqueness gained by following the pragmatic vision of His Majesty Sultan Qaboos. Sanjrani also praised the Oman’s balanced policies and its stance in the international arena.

He also apprised the delegation about the situation in Indian Held Kashmir (IHK) and said that India has blatantly violated international laws and covenants. He said that international community must take notice of the Indian brutalities. “Pakistan wants peace in the region, however, Indian hegemonic mindset will ruin all peace efforts if international community remained a silent spectator”, Sadiq Sanjrani maintained. Women, children and elderly persons, Chairman Senate said, are the worst victims of ferocious Indian wickedness. “Modi government has lost its mind as its decisions are based on fulfilling the agenda of its masters” he said.

Leader of visiting delegation Abudllah Bin Mohammed Bin Abdullah Al Salmi, Minister for Endowment and Religious Affairs said that Parliament is most appropriate platform for exploring the avenues to enhance the economic cooperation.  The heads of the parliamentary friendship groups can decide the future line of action for the cooperation not only to promote the Parliamentary linkages but to enhance the economic ties.

Senate Chairman thanked the visiting delegation for their support on the Kashmir issue and expressed the hope that world should play its role to resolve this issue in light of the UN resolutions as no sensible person can allow the continuity of such human brutalities.  Chairman Senate also hosted a reception in honor of the Omani Minster.