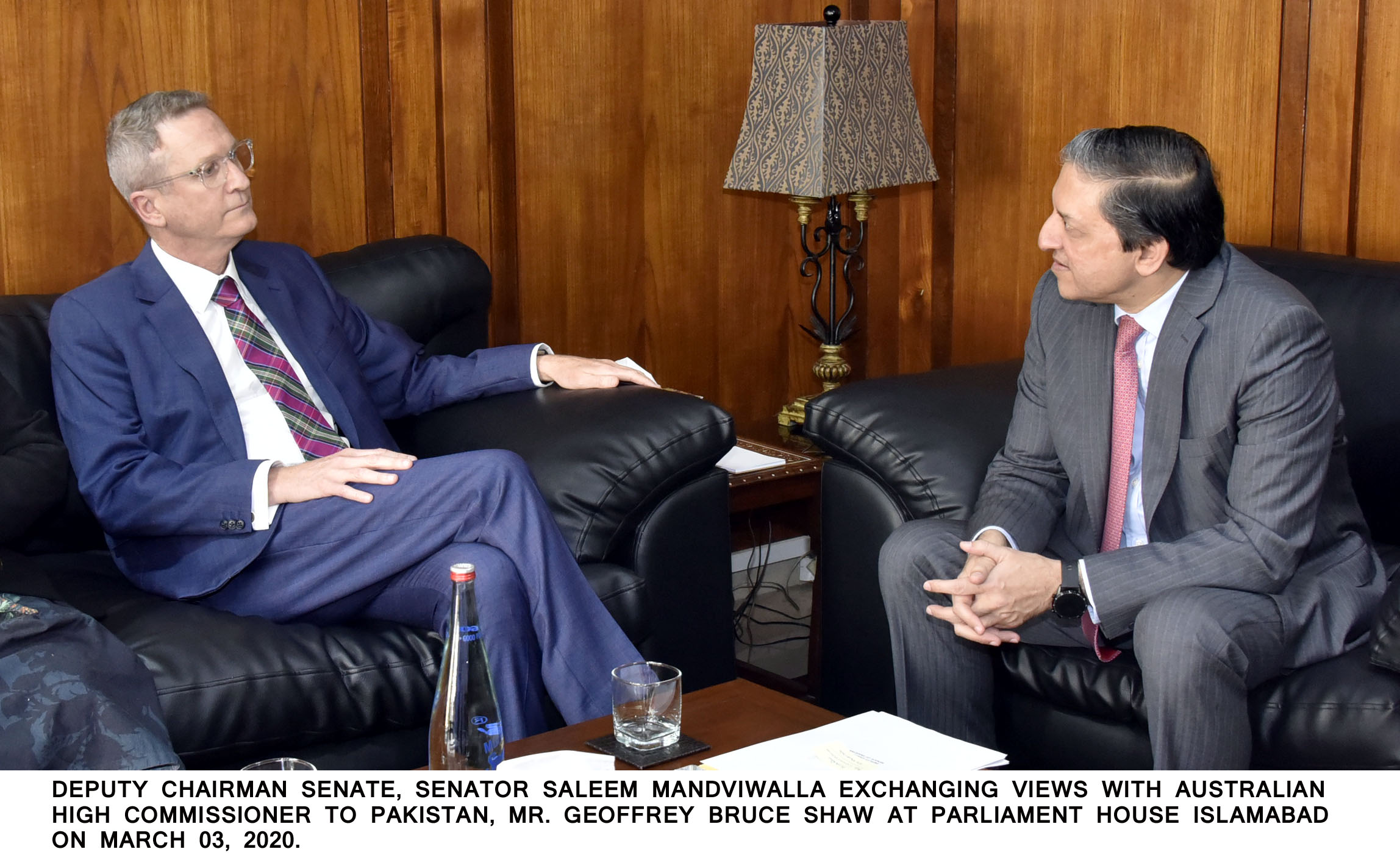 Event Title: In a meeting with the Dr. Geoffrey Bruce Shaw, High Commissioner of Australia, Deputy Chairman Senate Saleem Mandviwalla proposed that Pakistan and Australia need to work together

In a meeting with the Dr. Geoffrey Bruce Shaw, High Commissioner of Australia, Deputy Chairman Senate Saleem Mandviwalla proposed that Pakistan and Australia need to work together for making an arrangement for enhanced trade through signing of Preferential Trade Agreement (PTA).  He said that PTA seems a viable option to boost trade and economic linkage between the two sides.  He said that Pakistan attaches highest priority to its relations with Australia and is looking forward for increasing the parliamentary exchanges.  He said that cooperation extended by Australia in education and development sector is laudable and Pakistan would like to expand this interaction to other areas of mutual ties, especially promoting parliamentary linkages and enhancing people to people contacts.  He said that exchange of parliamentary delegations would also steer the economic cooperation and those of the business delegations would help explore the new avenues for increasing bilateral trade.

The Australian High Commissioner called on the Deputy Chairman Senate at the Parliament House on Tuesday and discussed matters of bilateral significance besides exchanging views on further boosting cooperation.  Deputy Chairman Senate said that Pakistan and Australia enjoy close and cooperative relations. He underscored the need to explore new avenues for cooperation. He said that trade and economic relations are an important component of our ties. “Institutional mechanism exists in the form of Joint Trade Committee which should meet regularly to find ways and means to enhance trade links” Mandviwalla observed.    He said that enhanced parliamentary linkages would be helpful in opening up new vistas of cooperation.

Australian High commissioner agreed with the views of Deputy Chairman Senate and said that huge potential exists to enhance trade and economic linkages. He thanked Deputy Chairman Senate for warm welcome at the Parliament House. The High Commissioner informed that number of students would be increased with the passage of time.  He said that currently 14000 students are studying in various institutes of Australia which they aim to enhance 20000 in the coming days.

Senators Kalsoom Perveen, Dr. Mehr Taj Roghani and Muhammad Usman Khan Kakar were also present during the meeting.  They also stressed the need for enhanced linkages at parliamentary and other levels.