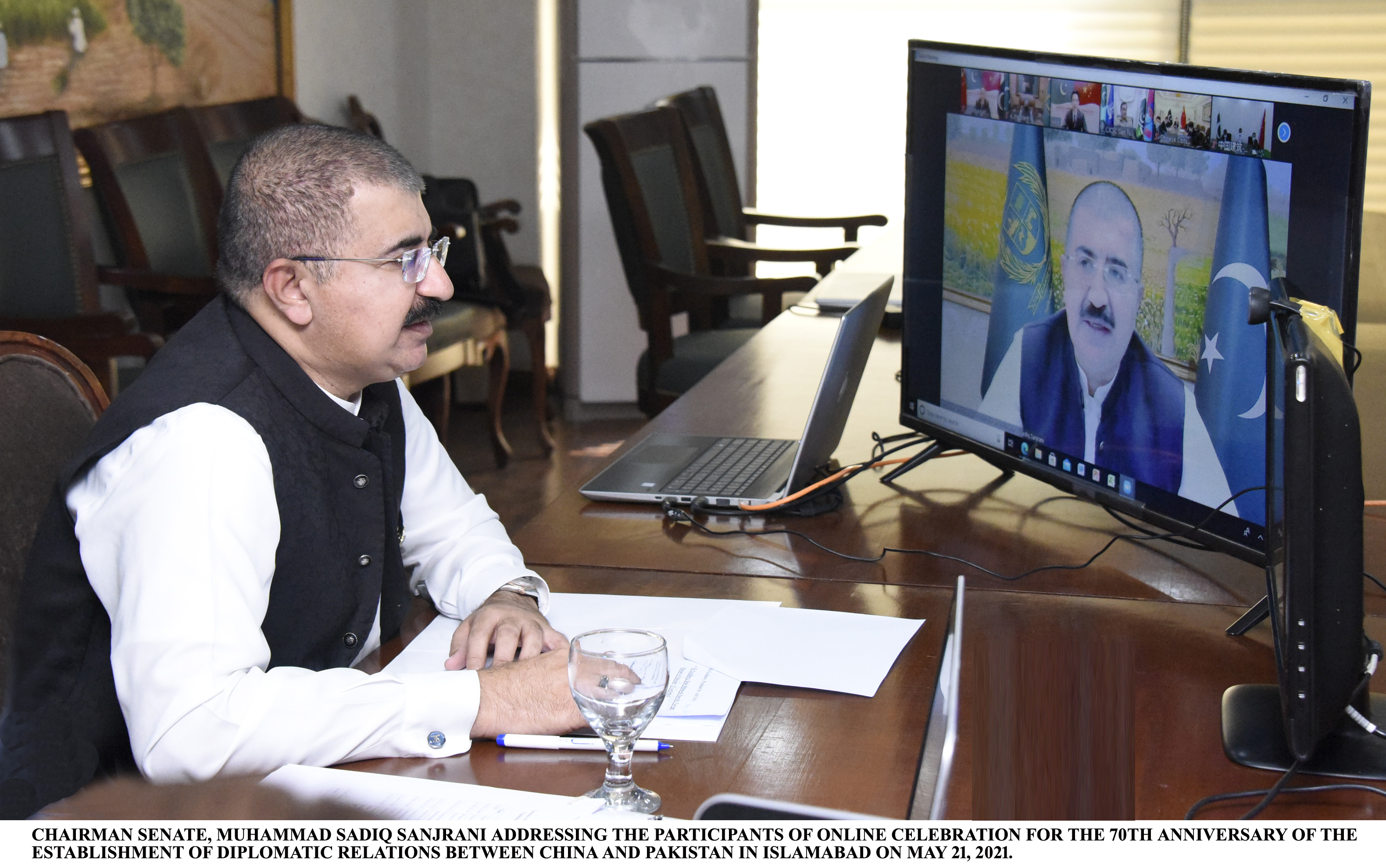 Chairman Senate Muhammad Sadiq Sanjrani has said that China-Pakistan friendship is embedded in centuries-old linkages, and historical and cultural exchanges. Pakistan was the first Muslim nation to recognise China as it opened a new chapter of history of bilateral relations with Pakistan. Since then, China and Pakistan have maintained close communication, coordination and unconditional support on international and regional issues of common concerns.

The Chairman Senate was addressing participants through an online link to celebrate the 70th anniversary of the establishment of diplomatic relations between Pakistan and China.

He said that the Parliament of Pakistan and the National People’s Congress of China have also been working closely to further solidify our bilateral ties. Regular meetings between the parliamentarians of our two countries provide guidance and impetus to bilateral ties. The two legislatures have also established Friendship Groups to strengthen cooperation between our great nations, he informed the participants.

“Our joint efforts have reaped great success in diverse areas. A few notable examples include the Karakoram Highway, Heavy Industrial Complex, cooperation in the space programme, the development of the JF-17 Thunder, large hydropower projects and the multi-billion-dollar CPEC”, the Chairman Senate observed.

He remarked that CPEC opened new avenues of cooperation between the two countries and the project is a remarkable demonstration of our time-tested friendship.  Chairman Senate hoped that CPEC will not just be an exemplary project, but will prove to be one of the biggest and most successful mutual economic endeavours of all time for the world to see.  “It is an honour for me to be present among such an esteemed gathering which is testimonial to the long-lasting and unconditional relations between the People’s Republic of China and the Islamic Republic of Pakistan”, Sadiq Sanjrani said while expressing his felicitations to the government, leadership and people of China. He also congratulated the Embassy of the People’s Republic of China, for arranging this online event to celebrate such an auspicious occasion.

He acknowledged the wonderful effort by the Chinese Embassy and the Pakistan-China Institute for presenting such an interesting and informative documentary to commemorate the 70th Anniversary.  He said that 21st May, 1951 marks an extraordinary moment in the history of Pakistan as formal diplomatic ties between China and Pakistan were established. During the past seven decades, Pakistan-China relationship has withstood the test of times and transformed into an ‘All- Weather Strategic Cooperative Partnership.’ He said that Pakistan and China are time-tested friends, staunchest partners and iron-brothers. Friendship with China has always remained the cornerstone of our foreign policy, Sanjrani further added.

“China and Pakistan are not just neighbours, but companions, because our mutual interests go beyond politics, and are deep rooted down to a shared public sentiment”, Chairman Senate said.  Sanjrani thanked China for support on the Palestine issue at international forums. He said that our deep-rooted and multifaceted ties are deeply ingrained in the hearts and minds of our people and imprinted in our national psyche. He also thanked the Chinese government for support in Pandemic. He underlined that China has proven to be dear friend through provision of

Economic development and growth is a shared agenda of both China and Pakistan and both sides will continue to promote regional development through cooperation in various sectors, he underscored Deputy Chairman Senate Mirza Muhammad Afridi was also present during the meeting.