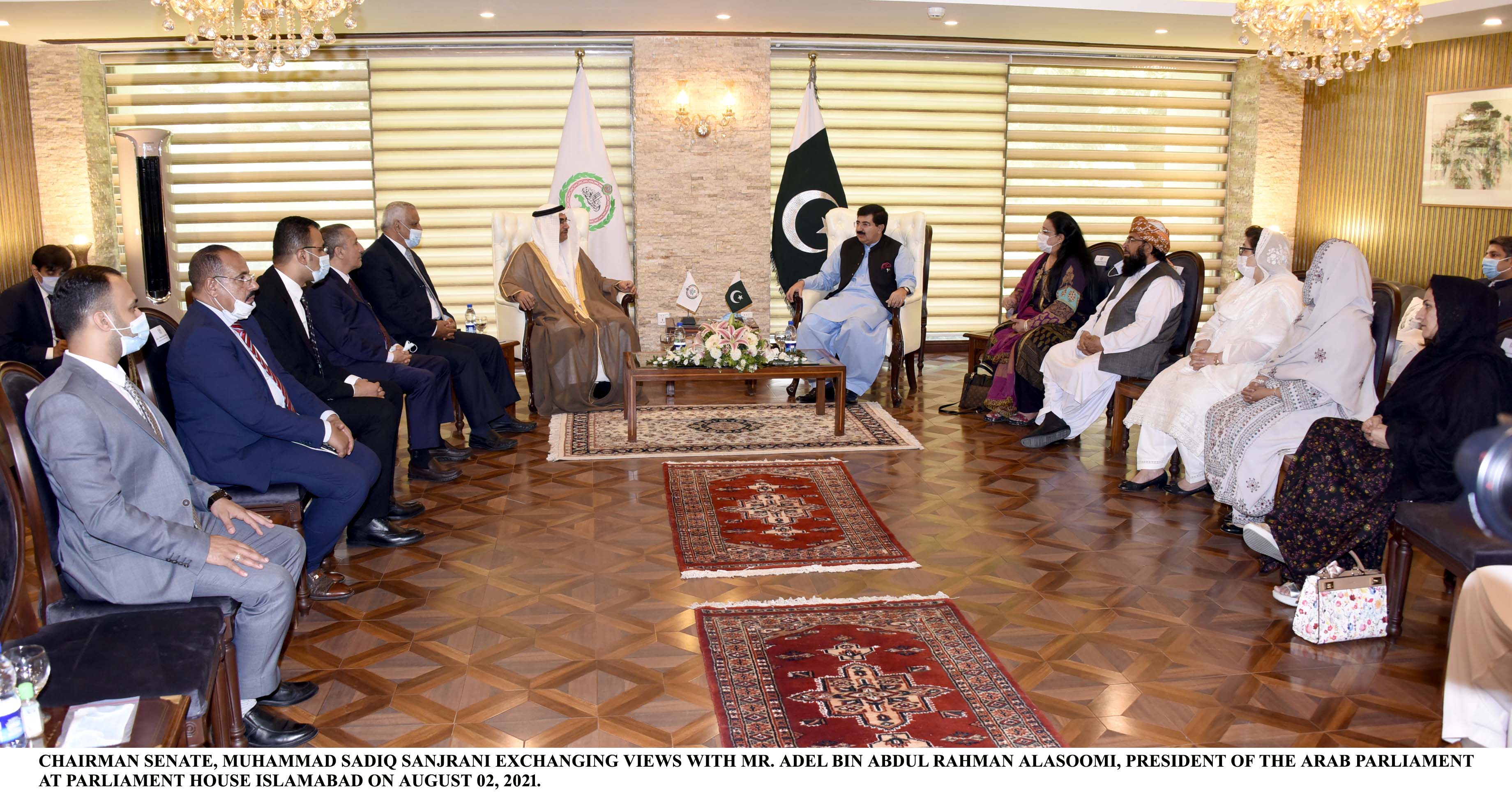 Event Title: Pakistan stands with Palestinians and Kashmiris and will continue to support the downtrodden people of the occupied territory: Sadiq Sanjrani

Pakistan stands with Palestinians and Kashmiris and will continue to support the downtrodden people of the occupied territory: Sadiq Sanjrani

Pakistan is a vital country for the Arab World. Economic development and social prosperity is a shared commitment of ours, and we will move forward with it: said al-asoomi

Both the dignitaries exchanged views on issues pertaining to Kashmir and Palestine. The Chairman reaffirmed Pakistan’s never-ending support for the legitimate rights of Palestinians. “As per international laws, Pakistan stands for a free and an independent Palestinian state. Pakistan stands with the oppressed Palestinians in their just struggle for freedom and will never recognise Israel under any circumstances”, Sanjrani maintained.

“Innocent Kashmiris are also looking at the Muslim Ummah. The issue of Palestine and Kashmir has created an aura of unrest and anger in the Islamic world and Arab countries. For enduring peace and security in the region, the Kashmir issue needs to be unravelled in accordance with the UN resolutions”, the Chairman stressed.

Hailing the role of the Arab League legislative body, Sadiq Sanjrani maintained that Arab Parliament provides opportunities to enhance cooperation with Arab countries.  Parliamentary coordination will pave the way for future collaboration, he noticed. The Chairman calls for stepping up Inter-parliamentary coordination to understand the issues and find solutions to the problems. Training programs can also be arranged related to legislation for the Arab Parliamentarians, he observed.

While pointing out the economic potential, the chief of the Upper House said that there is ample scope for coordination in trade, human resources and investment. In the age of globalisation, the importance of bilateral and multilateral cooperation has increased further.

“For the protection of the rights and unity of Muslim Ummah, Pakistan highly regards its relationship with the Arab countries. This visit of a high profile delegation from the Arab Parliament will take relations to new heights”, the Chairman underscored.

The President of the Arab World expressed his great pleasure in visiting Pakistan and declared Pakistan an important country for the Arab world. “We highly regard cooperation with Pakistan”, said Al-asoomi.

“Economic development and social prosperity is a joint commitment of ours, and we will move forward with great zeal and fervour, the visiting dignitary noted.

Sanjrani said that visiting the Arab leagues’ legislative body is an honour and great privilege. Soon, along with the Parliamentary delegation, he will visit the Arab Parliament, he affirmed.

The high profile delegation from the Arab Parliament also visited the Senate Museum and signed a Memorandum of Understanding. Later, the President of the Arab Parliament, Mr Adel Abdulrahman al-asoomi, recorded his remarks in the visitor’s book.

The high-profile delegation is visiting Pakistan at the invitation of the Chairman Senate Sadiq Sanjrani. The delegation will also have meetings with top officials during its five-day stay.