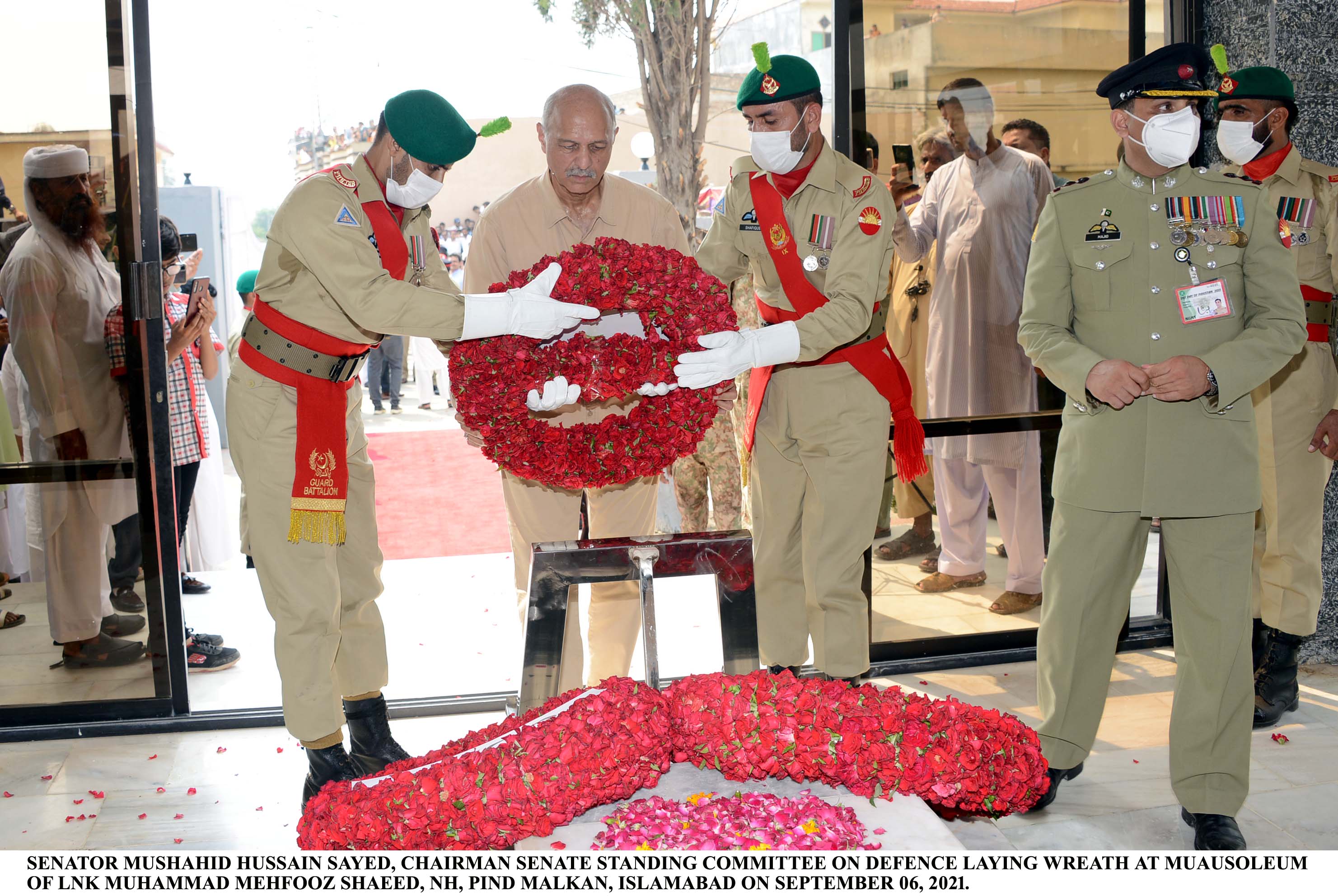 To commemorate the Defence Day and to pay tribute to the martyrs of Pakistan, members of the Senate Defence Committee headed by its Chairman Senator Mushahid Hussain Sayed visited the home of military martyrs here in Islamabad and Rawalpindi.

The Chairman Committee along with other members of the Committee visited the mausoleum of Lance Naik Mehfooz Shaheed, Nishan-i-Haider and paid homage by laying a wreath at the mausoleum followed by a visit to his family.
Chairman Defence Committee, Senator Mushahid Hussain Sayed while addressing a gathering at the mausoleum, lauded the exemplary courage and heroism of Shaheed Mehfooz and other brave sons of the soil, who laid down their lives in Defence of the country. “We also salute the resilience and resolve of the mothers, fathers and families of our martyrs. Eternal sacrifices of martyrs for the homeland can never be forgotten”, he remarked.
The presence of all the provinces of Pakistan and all the political parties in the Senate Defence Committee is proof that the whole nation is united for national security, Senator Mushahid Hussain Sayed underlined. “If we are sleeping peacefully today it is because of the supreme sacrifices of our brave martyrs” he underlined.
Later on, the committee members, headed by Senator Mushahid Hussain Sayed visited the family of Major Mudassir Shaheed, who sacrificed his life for the country in Orakzai Agency in 2017, while fighting the terrorists. Senator Mushahid Hussain Sayed stated that September 6 dawns every year with the remembrance of national spirit and for the renewal of our resolve to lay down our lives for beloved motherland. Senator Mushahid further reiterated that the parliament of Pakistan and our valiant armed forces are standing shoulder to shoulder with the nation. Our martyrs have immortalized the day as a symbol of courage, bravery, sacrifice and national integrity, he underscored.
Leader of the House in the Senate, Dr Shehzad Waseem, Senator Waleed Iqbal, Senator Talha Mehmood, Senator Zarqa Suharwardy Taimoor, Senator Eng Rukhsana Zuberi, Senator Anwar ul Haq Kakar, Senator Faisal Javed, Senator Hidayat Ullah also accompanied the Chairman committee during the visits.