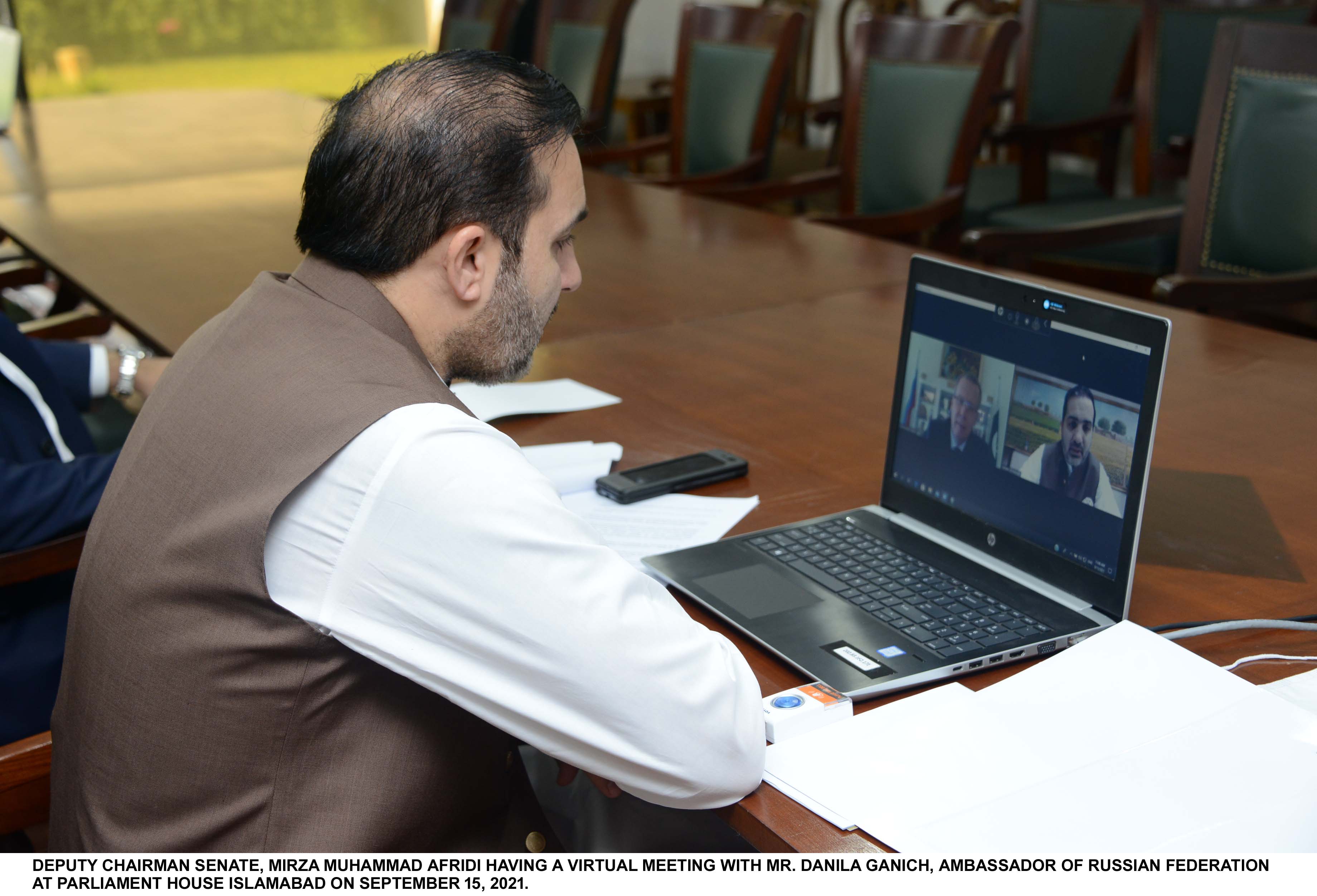 In a virtual meeting with Russian Ambassador Danila Ganich, Deputy Chairman Senate Mirza Muhammad Afridi underlined the need to work together to counter the challenges of climate change, poverty, Human rights and other issues of mutual concern. “Relations with Russia remains a key priority of Pakistan’s foreign policy”, said Deputy Chairman Senate while speaking virtually with the Russian Envoy here on Wednesday.

During the meeting, issues of mutual interest, Afghan situation and overall regional situation were discussed.

Afridi underscored that relations between the two countries have improved significantly over the last two decades. While pointing to the recent telephonic conversation held between Imran Khan and the Russian President, and conversation on bilateral relations held between Foreign minister Shah Mehmood Qureshi with his counterpart, the deputy chief of the Senate stated that both the countries have maintained contacts at high-level, which is of paramount importance.

Economic ties between the two countries were discussed in detail during the meeting. Discussing the gas pipeline project, Deputy Chairman Senate said that Pakistan is working towards early completion of the Pakistan-Stream Gas Pipeline Project. Meetings of the technical committee are being held regularly to finalise the Project, he added.

Both the dignitaries stressed the need to further cement the bilateral relations between the Senate of Pakistan and the Council of the Federation as well.

Discussing the impact of COVID-19, Afridi said that the pandemic has wreaked havoc on the lives and livelihoods of people across the globe. He commended the development of “Sputnik” vaccine by the Russian Federation.

“Both countries, being the member of the Inter-Parliamentary Union (IPU) and Asian Parliamentary Assembly (APU), need to utilise these forums and work together for the creation of a prosperous and peaceful future of the world”, Afridi remarked.

This year the bilateral trade volume has swelled and hit a record 780 million US dollars, Afridi expressed with pleasure. Keeping in view the true potential of both the countries, he called for upswinging the trade volume to its desired level.

“The collaboration between the two sides in the field of Railways, Transport, Oil and Gas, Power Generation etc is satisfactory”, Deputy chairman senate observed. The Inter-Governmental Commission (IGC) on economic, trade, scientific and technical cooperation is a very useful institutional mechanism to discuss a range of issues, ideas and proposals to further enhance economic linkages”, he underscored. Afridi hoped that the upcoming meeting of IGC in Moscow, to be held in Nov 2021 would be a meaningful engagement.

The Russian Envoy hailed Pakistan’s effort for peace in the region. He said that Pakistan is an important country in the region, adding that Russia cherishes its cordial ties with such a significant country of the region.

Note for the editor

There are 7 Joint Working Groups (JWGs) under the Inter-Governmental Commission (IGC), JWGs on education, Science and Technology, Food and Agriculture, Transport, Finance and Banking, Industries on Production have yet to hold their inaugural meeting.