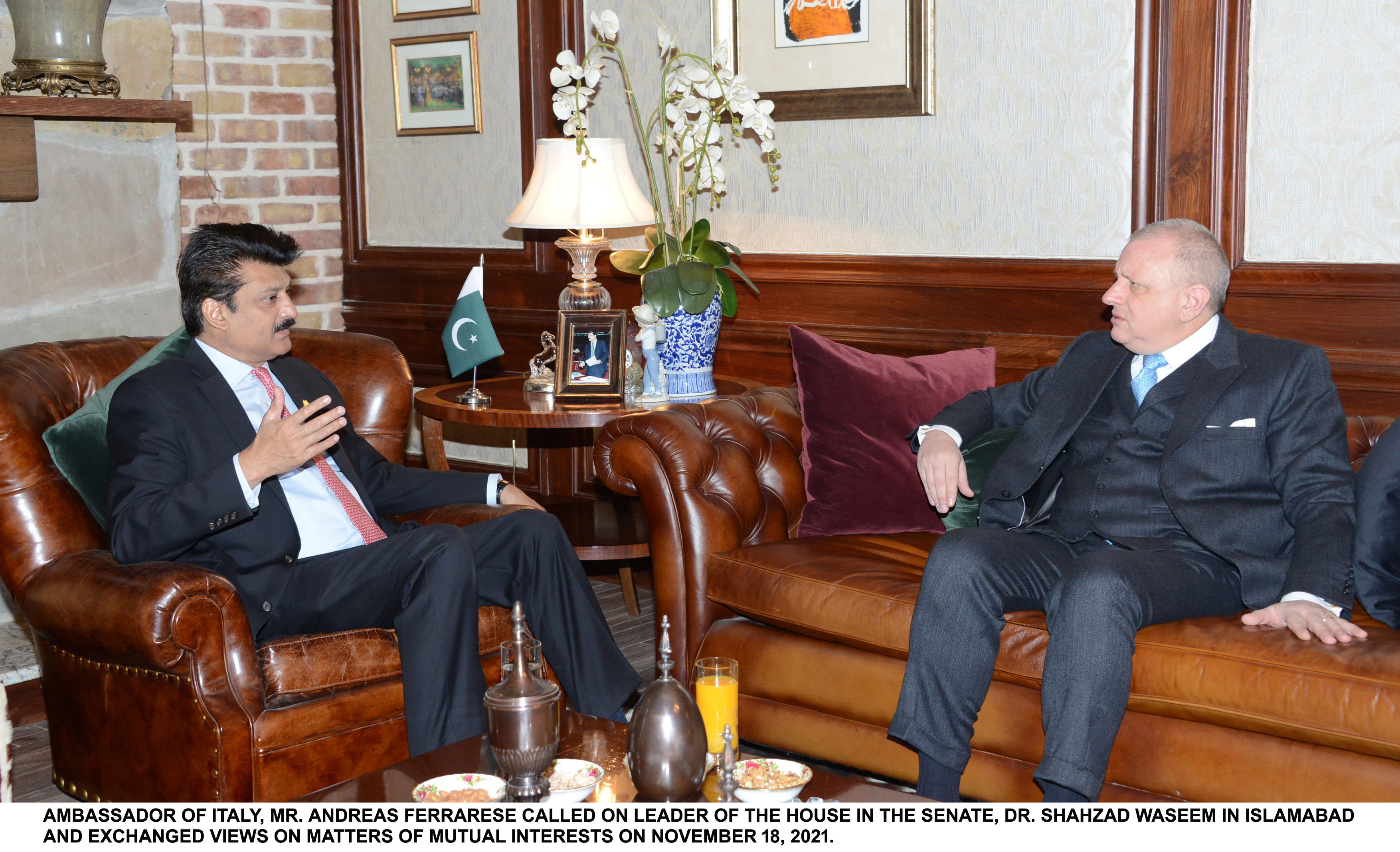 Italian Ambassador to Pakistan H.E. Andreas Ferrarese called on Senator Dr. Shahzad Waseem, Leader of the House in the Senate at his residence today.

Issues of mutual interest were discussed in detail during the meeting, and emphasis was laid on parliamentary cooperation and institutional support between the two countries.
Leader of the House Senator Dr. Shahzad Waseem said that Pakistan was keen to further enhance bilateral relations, trade and economic ties with Italy and  there is need to enhance the exchange of parliamentary and trade delegations to further strengthen people-to-people contacts.
Leader of the House said that recent joint sitting of the Parliament of Pakistan was a historic in which historic legislation was enacted fulfilling the longstanding demand of Pakistanis abroad for the right to vote.

Leader of the House further added that 150,000 Pakistanis are currently living in Italy. Pakistani Diaspora is playing a vital role in the development and prosperity of both Italy and Pakistan. He said that Pakistanis residing in Italy were contributing around 600 million dollars in foreign exchange to Pakistan. He thanked leadership of Italy for its support on GSP Plus. Leader of the House in Senate Senator Dr. Shahzad Waseem said that the bilateral trade volume needs to be further increased. “There are vast opportunities for trade and investment in various fields between the two countries. Italian investors can benefit from investing in Pakistan. Italy has a prominent place among European countries”. The Ambassador of Italy said that there are vast investment opportunities in Pakistan which will be fully utilized.
The Italian Ambassador appreciated the role played by Government of Pakistan in providing humanitarian assistance for safe evacuation of foreigners from Afghanistan.
The Leader of the House reiterated that Pakistan strives for peace and development in the region and will continue to play its positive role for peace.
Senator Dr. Shahzad Waseem while referring to the efforts of Prime Minister Imran Khan regarding issue of climate change said that the environment friendly policies of the Government of Pakistan were very well received at the international level. The Italian Ambassador remarked that the Pakistani community in Italy was playing a positive role in the development of Italy and acts as a bridge between the two countries.