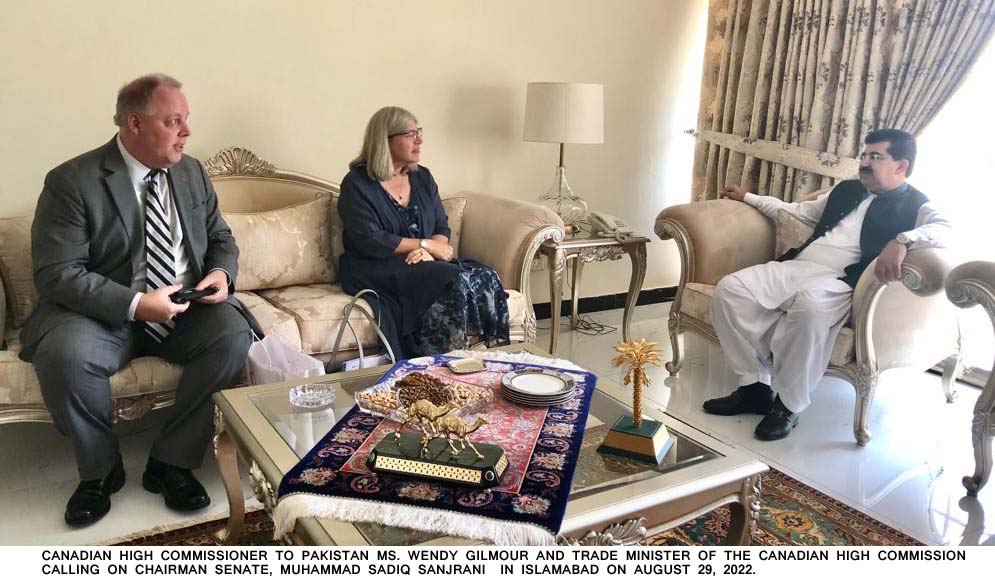 The two sides also discussed ways for further cementing bilateral, trade and social linkages. Pakistan seeks bilateral, long-term and multilateral sustainable relations with Canada, the Chairman said. They also examined the future roadmap for bringing close together the people of the two countries. Trade cooperation between the two countries could improve the quality of life in the entire region, he added.
Pakistan and Canada can benefit from each other’s experiences. He expressed best wishes to the leadership and people of Canada. “Free from ethnic discrimination, justice and equality-based attitudes are indispensable for the promotion of world peace. Developed countries can play an important role in ensuring respect for basic human rights in Occupied Palestine and Occupied Jammu and Kashmir”, Sanjrani stressed.
The Chairman Senate enlightened the visiting dignitary about the current flood situation in Pakistan and said that devastating flash flood in the country has left millions of people homeless, scores dead and many injured, adding that Natural disasters are a big challenge for any country or society. He stated that no one alone can face such emergencies and calamities.
Sanjrani urged developed countries to come forward and support Pakistan in this hour of need on humanitarian grounds. He also acknowledged the support and assistance provided by global community specially Canada. The meeting agreed to enhance bilateral cooperation in diverse fields and frame ways to enhance parliamentary cooperation, increase trade, visa issues and people-to-people contacts between the two sides.