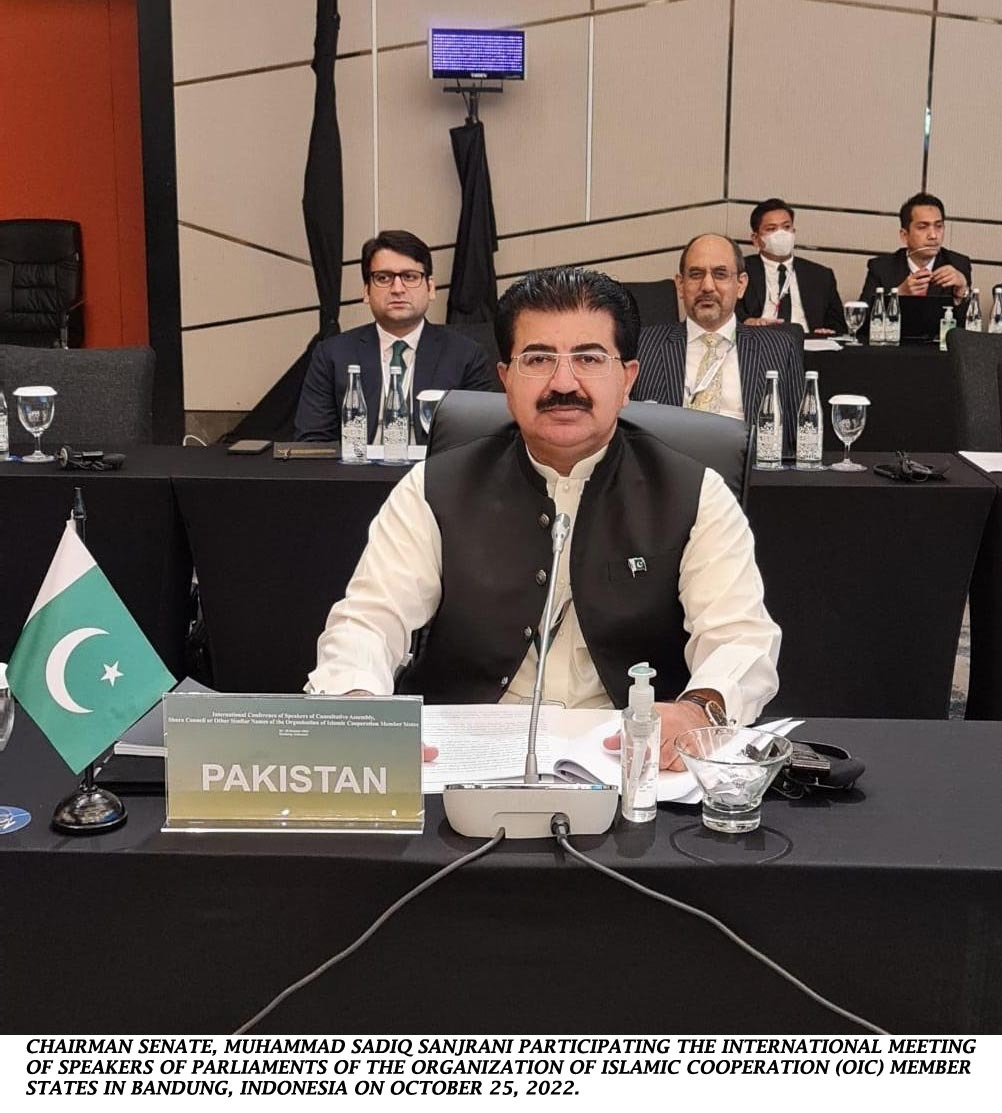 All the enemies of Islam successfully target us individually and collectively. Despite the fact that Islam bears the message of tolerance and peace, yet the myths and misconceptions, often with hidden geopolitical agendas, continue to dominate the media because we have repeatedly failed to act as a unit. Chairman Senate Muhammad Saqid Sanjrani said this while addressing the inaugural plenary of World People’s Consultative Assembly Forum in Indonesia. He emphasized that the rising Islamophobia that continues to display dire consequence for Muslims, needs urgent attention. The Pakistan Senate’s Chairman Sadiq Sanjrani accentuated on the atrocities being committed against Muslims in Palestine and Kashmir in particular, and urged to loudly present solving the Rohingya refugees’, crisis and the Afghan rehabilitation. “We must, in close liaison with the UN Security Council, converge this mission with the help of Forums such as this” he added.
Chairman Senate while addressing the forum also mentioned that the United Nations General Assembly adopted a resolution by consensus which was introduced by Pakistan on behalf of the OIC that proclaimed March 15 as 'International Day to Combat Islamophobia'.
Sadiq Sanjrani while addressing the parliaments of the Islamic world lamented that some Muslim countries are in conflict with others and questioned why should Muslims be fighting Muslims? And why do we continue to act like puppets in the hands of more powerful nations who may not be acting in our best interests?” he maintained. Sanjrani said that Pakistan knows the cost of conflicts as we have suffered heavily during the Pakistan’s War against Terrorism in which 83,000 innocent Pakistani lost their lives and the War cost us around US$ 126 billion. But thanks to Pakistan’s strong Armed Forces we were able to overcome the terrorism by defeating the enemies of peace. He emphasized that Pakistan’s Armed Forces are one of the most Professional Armed Forces in the world, who are always willing to accept any challenges in the world. Sanjrani said that the Pakistan Armed Forces roles in UN peacekeeping missions, during war and peace time, are a clear testimony to it.
Chairman Senate during his address to the Global parliaments brought proposals of constituting a “Conflict Resolution Committee” and a “Trade Promotion Committee”, through an appropriate forum, with which we can work to eliminate all existing conflicts between Muslim nations through peaceful dialogue under impartial arbitration and through which we will be able to explore and utilize a huge trade potential to enhance economic cooperation among OIC members. Chairman Senate also suggested establishing a permanent secretariat of this Forum as well.
Chairman Senate thanked Indonesia for dispatching humanitarian relief aid for the flood affectees in Pakistan. Chairman Senate while addressing the Global Conference said that Pakistan continues to suffer a great humanitarian crisis after the recent floods. The Chairman Senate acknowledged the wonderful contributions by Crown Prince, Prime Minister of Saudi Arabia, Muhammad Bin Salman, Recep Tayyip Erdoğan, the President of Turkey and Sheikh Tamim bin Hamad Al Thani, the Emir of Qatar for supporting the youth, and bring about IT revolutions in his country and beyond.
The Chairman Senate also congratulated the People’s Consultative Assembly of the Republic of Indonesia for taking the lead in the creation of this synchronized forum with the OIC, the Parliamentary Union of the OIC the Parliamentary Union of the OIC and the Muslim World League to maximize results.